The symbol on the wheel for this House is the Egyptian dung beetle, a Buprestid scarab whose scientific name, Kheper aegyptiorum, reflects the name by which the Egyptians deified the creature. More on this in the main text (which will explain why I picked it).

Here's a quote from the Cultural Etymology Digest article on Beetles as Religious Symbols:

The capital of the solar religion was the city of On, which Greeks called Heliopolis ("the City of the Sun"). It was probably at On that Khepri, a scarab god of the sun, appeared in the predynastic epoch. Khepri might have been associated with the brilliant Kheper aegyptiorum, (whose name was coined by André Janssens, in 1940) or to the black Scarabaeus sacer, which was more often figured later. Nowadays, only the latter occurs in this region; the former being a more southern species probably due to significant climactic changes since Egyptian civilization. The name Khepri (or Kheperi, or Khepera) means "The Being, The Extant." The name Khepri is related to other words of the same root, e.g. kheper "to exist, to come to existence" and khepru "transformations, metamorphoses." Originally, Khepri represented the sun from sunrise to sunset, although the oldest texts describe him setting in the western horizon at dusk. He quickly lost some importance, and became confined to the associative role with the rising sun, which he maintained throughout the entire Egyptian civilization. He is represented as a man with a scarab topping or replacing his head (Figure 1). Khepri lost his association with the "dying" evening sun, to the god Atum, who is often figured with a ram head. For this reason, the ram-headed scarab represents the sun in the double aspects of rising/setting, or birth/death. To Khepri and Atum is often added Re, "The Sun," who subsumes them.

In Khepri's role as "sunset-to-sunrise" keeper of the sun, he represents the hidden, literally the occult. The Twelfth House represents hidden things and secrets, and while my religion is (obviously) no secret, it has hidden aspects, and is part of the larger scheme of things termed by some as "The Occult" (woo woo).

My religion is not only what most folks would call a religion, it isn't even what I myself would think of as a religion. It's more of a discipline (though I'm none too disciplined in the practice thereof; Uncle Al wouldn't've put up with me for ten seconds), in the sense that word has of "way of life". It's not really a eupraxophy, since I do believe in transcendent intelligences, though I don't necessarily believe that they're external to us. Until I find out otherwise, my Holy Guardian Angel is The God That Is Me.

So, in case you hadn't figured it out by now, I'm not a Christian. In fact, I'm not any one of the Big Three.

Who calls us Thelemites will do no wrong, if he look but close into the word. For there are therein Three Grades, the Hermit, and the Lover, and the man of Earth. Do what thou wilt shall be the whole of the Law.

Who calls me a Thelemite won't get much of an argument from me, since I am a member of O.T.O. However, what I do isn't really limitable to general O.T.O. practice. Maybe it's best to start at the beginning.

I Was a Teenage Pagan

Actually, I was a twenty-something Pagan, but that's not as catchy a header. I was first introduced to the idea that there were people out there attempting to reproduce or recover or recreate the religion of my northern European ancestors when I got connected with a local group here called the Institute for Celtic Studies. It was basically a bunch of people with Celtic ancestors (mostly Irish, some Welsh) who got together to have dinners and talk about books they'd read or to take beginning Gaelic classes with Jim Duran. And once a year, we'd all do a camp-out in some nice woodsy area (I remember "Madrakara" being the name of one such place) and do folk plays and play music and so forth. It was in watching the group do a recreation of the Padstow MayDay hobby horse that I suddenly realized, "Hey, for these guys it isn't a recreation, it's Real!"

(Many years later, I put together a 'Obby 'Oss ritual for NROOGD, and built them a 'Oss. There isn't a whole lot of that original 'Oss left, except the mask, but the ritual has gone on to have a life of its own, independant of me, and there are pictures to prove it.)

About the same time as all this was going on, I was taking mountain dulcimer lessons from Holly Tannen, and through her these two things happened:

So I went to the ritual, my very first one, sponsored by the New Reformed Orthodox Order of the Golden Dawn (which group Robert Anton Wilson has mentioned in passing a few times in Cosmic Trigger) (which by then was no longer new, was neither reformed nor orthodox, and had about as much to do with the Order of the Golden Dawn as an apple has to do with a socket wrench...). It was March, 1983. I was 21. It was the greatest thing I'd ever seen, short of High Easter Mass at Grace Cathedral.

Confessions of a Ritual Dramatist

I got off on this Pagan stuff bigtime. I stayed with it for better than thirteen years, writing dozens of ritual dramas, including at least two full sets for each of the eight great seasonal festivals (called Sabbats). I became a member of the Covenant of the Goddess, eventually being elected to the Board of Directors of that organization as its newsletter editor and recording secretary. J. Gordon Melton was heard to call me "One of the great Pagan liturgists of our time." I went to a conference on religious studies and talked about the need for ritual drama; I appeared on local TV news to talk about Beltaine; I answered a godzillion questions, some of which I turned into a Wiccan FAQ which CoG still uses. I created a Wiccan Curriculum and taught it to a group of people who became Black Oak coven, one of the (if not THE) strongest ritual teams in Northern California.

Selected Pagan Rituals by Me

A good question, that. The answer is, I changed. I didn't want just to invoke the Gods and then eat. I wanted to DO stuff. I wanted, as my friend Tom put it (in his most dramatic possible tones) SORCEROUS POWER!!! Ahem. And, by and large, the composition of Black Oak had changed over time to consist primarily of people who wanted to do theurgy (worship) rather than thaumaturgy (magic). So, rather than keep pulling against them, I let go. I led them on one last ritual, a journey out of the World, through a Judgement to a choice at the Wheel (by way of all the cards in between), and so to the end, where I put my tools in my bag, hung it on a stick, and walked away from them.

Update! I recently discovered that a pretty amazing thing has happened since I left NROOGD: a group of people, all of whom come from the (extremely amusingly-named, to me, at least) "Oak Line" of NROOGD have hared off on their own and created the Magical Acts Ritual Theater, performing ritual dramas of diversity and power, actually achieving non-profit status for this work. They have some really exciting plans afoot, and I'd heard about them (and applied to join them) well before I discovered that they are, in some sense, my spiritual grandchildren. I think it's all pretty damn funny; but I also think it's an interesting proof that the energy which one throws off into the pattern towards some specific end may not necessarily disappear once one ceases paying attention to it. ;) Anyway, back to the story.

So here I was, at a loose end, having literally stepped off into the Abyss. What to do? My bro Havoc23 was talking about having become a Mason, and I said to him, "No fair! You get to do the secret handshake number and all those cool initiations just cuz YOU have outdoor plumbing." He said to me, "Hell, if that's all you want, why not join the OTO?" So I did.

Well, it was a little more complicated than that. But that's the essence of it. I'm a ritual junkie and a peak-bagger (which is to say, I go for the peak experience). Transformative experiences are like a drug to me, and I wasn't getting them any more in Wicca. I'm getting a few more of them in OTO, but still not enough. So slowly, slowly, I'm building my own system, as I told the Black Oak folks I was planning to do when I left them. It's going to have a little Wicca and a little Thelema and a little of this and a little of that.

In months to come, I may put a little of what I discover up on this site. In the meantime, how about some...

Selected Thelemic Rituals by Me

Many of the rituals online at Monsalvat were also written by me.

Finally, I just had to throw in this AWESOME picture of my personal Thelemic Saint, Leila Waddell: 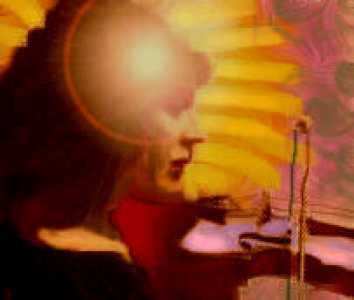 I got it at Ikon Thelema.