The symbol on the wheel for this House is an Egyptian barque under sail; the Egyptians held that the sun traveled in such a ship over the heavens and through the underworld each day.

I love my motorcyces. I ride to work every day, rain or shine. My main current ride is an '89 Yamaha XV1100 Virago. I also own a '74 Honda CB360 (my very first bike; here is a picture of me on it, taken at the Emeryville Marina near Sybase), and one of my dream bikes, a '73 Triumph Bonneville that looks a bit like this one. However, my Bonnie has a non-stock exhaust and racing cams; it used to belong to a woman who raced it. I've got quite a few motorcycle links.

Pride on my Ride!

I had the very great pleasure this year to ride for the first time with the Women's Motorcycle Contingent in the San Francisco Gay Lesbian Bisexual Transgender Pride Parade. I've put up a page of pix and descriptions all its own. 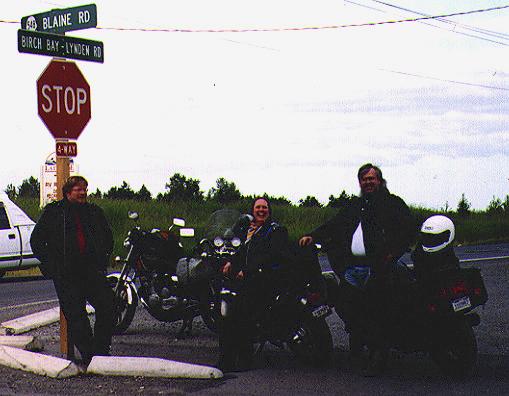 In June of 1996, my friend John Schmidt and I, along with John's old friend Jim Adams, attempted to complete an IronButt Association Saddlesore 1000. We were accompanied by Greg and Billie in the chase truck, which turned out to be more trouble than it was worth (the truck, that is; they were quite useful indeed). This is (left to right) John, me, and Jim, in Blaine at the end of the trip. I'm wearing my good-luck bandana, an authentic Full Throttle one given me by Larry the O (who works at LucasArts). Jo Ashburn, who also works at Lucas, gave me one too; it hangs up at home. Jo wrote the hint book and dedicated it to me among others -- I was very honored -- and presented me with a copy of the game and a Corley Motors t-shirt (before they were generally available!). But that's another story...

I still haven't sent in my documentation for the IronButt ride, because I'm not sure, in my heart of hearts, that we actually made 1000 miles, even though all three of our odometers read over 1000, and I hate rejection. Especially after the trip we had. It was definitely a quest, with all attendent triumphs and tribulations. One of these days I'll finish the Beowulf-style epic poem I began about it, and post it here.