The symbol on the wheel for this House is, oddly enough, a house...

Yes! Here it is, the page you've all been dreading, the one with a picture of my cat! 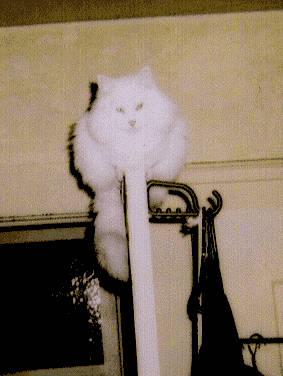 Yes, well. The Fourth House is about home, roots, domestic life, and the like. So here's where I tell you about me at home.

I live in the house I grew up in, in Berkeley. It's been in my family since the early 1920's; before that, it belonged to one of the first woman doctors in California. The room I now use for my computer room was once her examining room. After my great grandfather died, my great grandmother ran it as a boarding house for elderly ladies; three of the rooms upstairs have attached kitchenettes -- one still has all its appliances etc (it's where Grammy lived after she invited us to live there when I was 2). At some point, I'll scan the family's title; it tells how Grandad Robinson bought the place for something nuts like $200 in "gold coin of the United States"... Anyway, there's a good bit of history in it, and at least a normal share of ghosts.

If I was any stuffier, I might try to join the Native Daughters of the Golden West. As I said, I was born in Berkeley. Likewise, my Mom's mom and her parents, and my Dad's dad and his parents, were born in California, mostly up in the gold country. Just my luck that Mom should be born in Texas and Dad in New Zealand (NZ is where his mom emigrated to from Yorkshire, England). And I'm an Old Blue (Cal grad), like my mom and my Granddad Hussey before me; his thesis (which you can find by searching the Melvyl database for "hussey, edward") was on Planning the Modern Hospital... Some of Granddad's papers, relative to his work with architect Julia Morgan, are in the Bancroft Library. (You can see their catalog entry if you follow this link)

As far as any deeper roots are concerned, I'm pretty much a Euro-mongrel. Some Irish, some Scots, some Saxon, some Norman. My ancestors are the same Husseys that helped found Nantucket. In fact, bless me if I didn't find the furthest back ancestor of mine that I know of, in somebody else's genealogy pages on the web! Sheesh... As far as I know, however, I'm not related to Ruth Hussey, Olivia Hussey (especially since her real name is Olivia Longenecker) -- or any of the other Husseys you might come across at the Internet Movie Database, saving my brother Colin -- or Wayne Hussey...

I like to cook food and eat it. I have some recipes, and some food links.

I like to brew beer and drink it. I likewise have some beer recipes, and some beer links.

I have, at one time, concocted a ploughman's lunch where I did all of

The recipes for that are in the index...

I've also roasted a few small mammals on occasion. Check out my account of Greg's luau.

I liked that party so well that I threw another, for my own birthday, the next year. It had a nautical theme... There are recipes there too.

Traditionally, the Sixth House is also about one's domestic cattle, but my CATle are more related to my house than my profession, so they're here (actually, I suppose that in the days when one's house was one's profession, that made more sense...). I own two cats; the white one up above there is Kikazaru (a Japanese pun; it's what they call "hear no evil", containing both words for "not to hear" and "monkey") aka the Piglet on account of her appetite and tendency to eat anything, no matter how peculiar for a cat (any bread product, for example). The other is Epona: 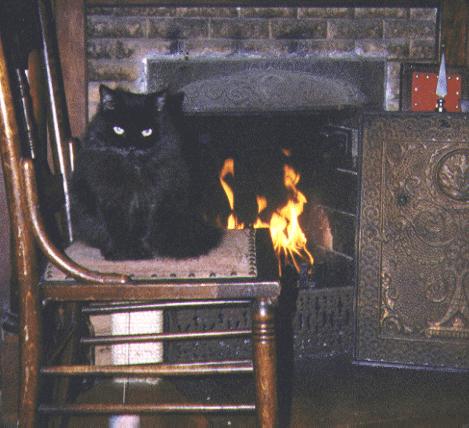 I think ferrets are cool. It's a pain that California Department of Fish and Game continues to be too proud to admit they're wrong, leaving CA the only continental state where ferrets are illegal to own. Here's a fun picture of some.